Resident Evil Code Veronica was originally released as a Dreamcast game back in the year 2000. Intended as the third numbered entry in the series (which was later given to Nemesis instead); Code Veronica continues where Resident Evil 2 left off. Three months after the Raccoon City Incident, we catch up with Claire Redfield who is still in search of her brother which, once again, drags her into another zombie apocalypse. Eventually, Resident Evil Code Veronica was re-released on the Playstation 2 and Gamecube under the special edition “Code Veronica: X” Which included updated visuals and some extra cutscenes. This was done because Capcom knew the Dreamcast was failing and all three titles available on the Dreamcast sold heavily under expectations. Eventually, it was released on PS3 and 360 in 2011 with updated visuals, 12 trophies/achievements, leader boards and more. 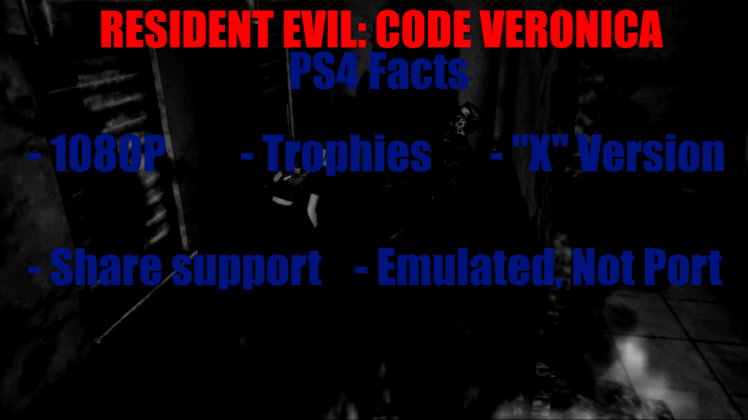 Unfortunately, this is not that version. Resident Evil Code Veronica: X on the PS4 is the original Playstation 2 special version ported originally from the Dreamcast. Unlike the million times ported Resident Evil 4, Code Veronica was not worthy of a unique port. This is simply an emulated ISO on the built in PS2 emulator. Granted, it does have 1080P support, share play support, and it does have more than 12 measly trophies. However, with Capcom wanting to “Return to the franchise roots” by releasing RE7; then giving RE4, RE5, RE6 and RE Revelations proper disc based full ports to PS4 and XOne, but giving Code Veronica a measly emulated version on the Playstation Store, is pathetic. Sad, really. If you are looking for something new here, you need to look elsewhere.